The star lot at Dorotheum’s Contemporary Art sale on 23 June 2021 is one of Austrian artist, Maria Lassnig’s, most important and prophetic paintings. At the turning point of her artistic career, Lassnig gave her attention to the exploitation of nature and produced this monumental 6m2, portrait-format painting in oil, entitled “Wilde Tiere sind gefährdet (Wild Animals Are Endangered)”, estimated between 600,000 and 800,000 euros.

This exceptional painting occupies an important position in Maria Lassnig’s oeuvre. It was created in 1980, the year in which she returned to Vienna to take on a professorship at the University of Applied Arts after having spent two decades in Paris and New York. In the same year, Lassnig and Valie Export became the first female artists to represent Austria at the Venice Biennale (commissioner Hans Hollein) and Lassnig finally received the broad public recognition she had longed for. The painting was exhibited in 1985 in her first major retrospective at the Museum des 20. Jahrhunderts in Vienna.

Exploited nature
Probably the most coherent description and interpretation of “Wild Animals Are Endangered” was given by Peter Gorsen, Rector of University of Applied Arts, in the 1985 exhibition catalogue:Maria Lassnig’s recurrent, often anti-patriarchal, theme of figures riding on one another’s backs, piggyback style, is employed once again in this painting. The figure of Mars is seen riding on the back of a creature which, using a low, wheeled contraption, possibly a gun carriage, as a means of transport, denotes an exploited workhorse or even symbolic cannon fodder. Below these figures, in the green lower half of the picture, is a group engaged in a murderous scene which can be interpreted as an allegorical representation of the extermination of exotic species and the ongoing destruction of life for the population of this continent. Here, as so often, Lassnig expresses her solidarity, and identifies with exploited nature, here represented in the form of a leopard skin spread out as if crucified on the ground which she overlays and fuses her own self-portrait. Compassion for ravaged nature and compassion for annihilated creatures are central themes in the artist’s self-portraits with animals and are always intended as an indirect criticism of the control and destruction of nature through violence.”

Body awareness
Maria Lassnig (1919-2014) is one of the most important European artists of the 20th century. She gained renown for her “Body awareness paintings”, which uniquely express her inner emotional state in the form of abstracted self-portraits. This is achieved through the use of a distinct choice of colours, to which Lassnig assigns body signals - “thought, smell, pain, agony, death, and later especially cancer-anxiety.” In addition to numerous other awards, the two-time documenta participant was awarded the Golden Lion for lifetime achievement at the 55th Venice Biennale in 2013. 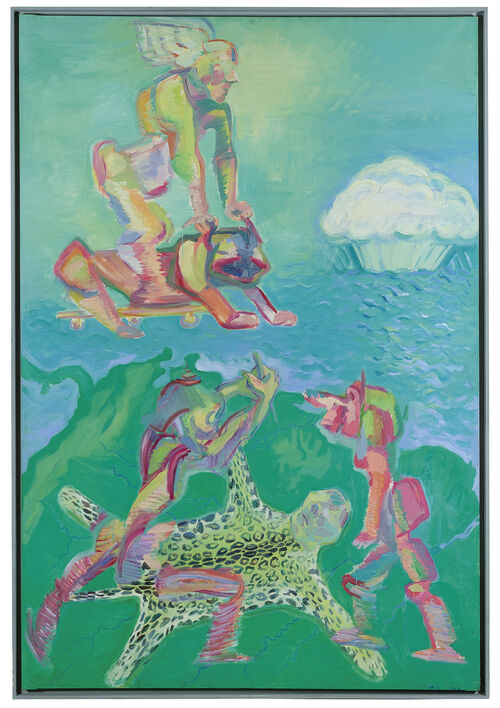